Last night our Redhawk Basketball teams hosted the Skyhawks of Hammond in their first regular season home game of the season. After coming off a dominating tournament championship last week, the girls team picked up where they left off by running away from the Skyhawks of Hammond by a score of 83-65. In a tightly contested first half affair, the Redhawk experience and depth took over in the second half led by Unique Drake’s 31 points and Mya Belton’s double-double (23 points and 10 rebounds). The Redhawks are 4-0 on the season now and will host Fairfield Central on Friday with the girls tip at 6:00pm.

The boys game got off to a fast start by the Redhawks as they jumped out to a quick 10 point advantage. The Skyhawks would cut in to the lead early in the 3rd quarter getting as close as 4 points before the Redhawks would make another run and never look back. The stingy defense of the Redhawks and sharp shooting of Russell Jones and Tyler Huff led the Redhawks to a 62-37 victory. The boys are now 3-1 on the season and will host Fairfield Central on Friday at 7:30pm. 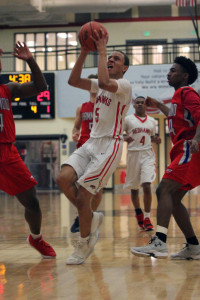